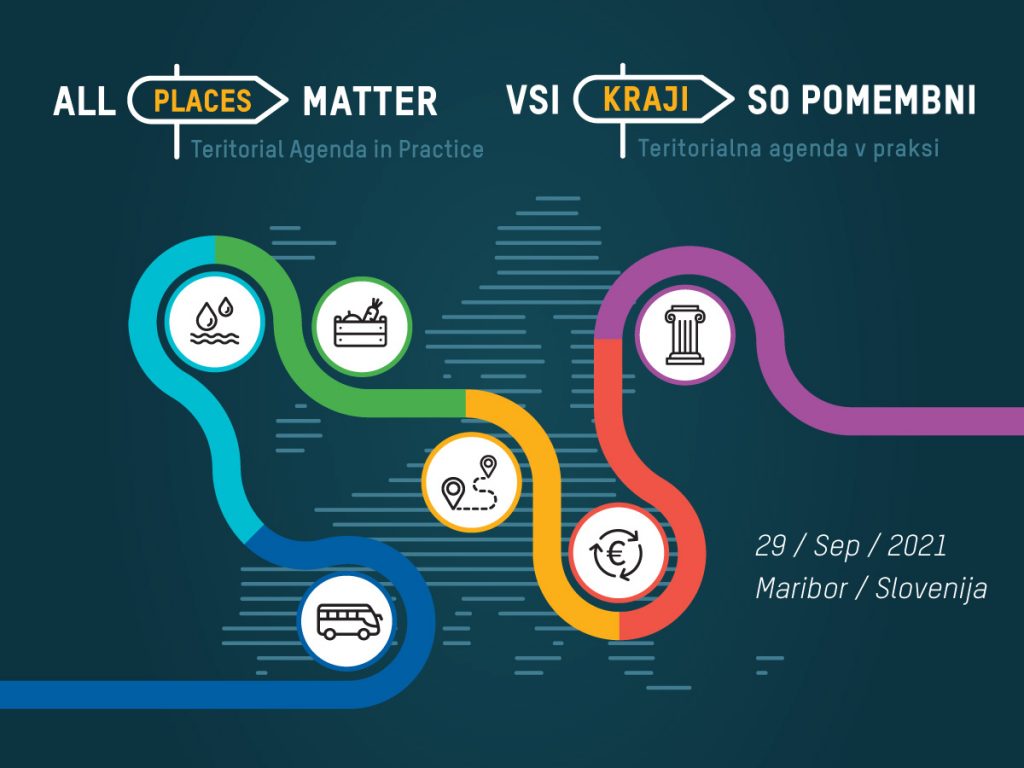 On Wednesday, September 29, 2021, the conference ALL PLACES ARE IMPORTANT: Territorial agenda in practice was held in Maribor. The conference was part of the Slovenian Presidency to the Council of the EU and was organized by the Ministry of the Environment and Spatial Planning in cooperation with IPoP − Institute for Spatial Policies and the Association of Municipalities and Towns of Slovenia. The aim of the conference was to enrich the discussion on territorial quality of life and to contribute to the integration of the territorial agenda into political processes at various levels.

The participants were first greeted on behalf of the Ministry of the Environment and Spatial Planning by Aša Rogelj, Deputy Director of the Directorate for Spatial Planning, Construction and Housing. She emphasized the importance of small towns, which provide equal access to services and the possibility of a good quality of life. She pointed out that the role of small and medium-sized cities is also emphasized in the framework of the Ljubljana Agreement, which will be submitted to the ministers responsible for urban development at the end of November.

On behalf of the organizer, the participants were greeted by Marko Peterlin, director of IPoP – Institute for Spatial Policies. He said that the main purpose of the event was to promote the Territorial Agenda 2030, which was created during the German presidency of the EU Council and started its implementation this year during the Portuguese and current Slovenian presidencies, and that the conference wanted to highlight cases of good practice that contribute to the implementation of this document.

In the first part, we hosted distinguished guests who introduced us to the topic. Daniel Meltzian from the German Federal Ministry of the Interior, Building and Community presented the new Territorial Agenda document. He stressed that the Territorial Agenda strives to give people the opportunity to live well wherever they want. In order to facilitate understanding, a summary and an atlas were prepared alongside the agenda, as well as a comprehensive list of cases that correspond to the priorities of the territorial agenda.

Wiktor Szydarowski, Director of the ESPON Program, presented a study prepared during the Slovenian Presidency of the Council of the EU on quality of life. He focused on territorial quality of life, the essence of which is that the perception of quality of life depends on location. An important emphasis was also that ESPON organizes Living Labs, with which they want to co-create research on the quality of life together with groups of professionals and citizens. In the coming months, ESPON will also prepare a study for the cross-border area, which includes the Karst, Istria and Trieste.

The main part of the conference consisted of six examples of good practice from European countries, regions and local communities, which are already following the priorities of the new territorial agenda. Unfortunately, Mojca Markič from the Municipality of Jezersko was not able to attend the conference.

Albert Garcia Macian from the Municipality of Mollet del Valles in Spain was the first to introduce himself to the participants. He presented an example of an area that was planned for the construction of a satellite city of Barcelona during the Franco regime. Numerous unwanted uses have developed in this vacated area and as a result, the space has become degraded. The municipality of Mollet del Valles, in cooperation with some neighbouring municipalities, has decided to protect the area as an agro-ecological park and dedicate it to food production. In most cases, growers have switched to organic farming and the production of cereals and legumes is manily intended for human consumption, not for animals. The municipality strives to support local farmers with a local shop and developing a single brand.

Oliver Horeni from the Upper Elbe Transport Association from Dresden, Germany, presented the system of public transport tickets valid in the cross-border area between the German state of Saxony and the Czech region of Bohemia. The cross-border region is characterized by national parks visited by both foreign tourists and residents of the region on both sides of the border. Many cross-border routes are also made for shopping. The ticketing system applies to local trains, a high-speed train, buses and a ferry. For the time being, it mainly addresses the needs of leisure travel, while tickets for daily commuters have yet to be developed. The development of the cross-border ticket system has been quite demanding, as there are two different currencies as well as socio-economic differences between the regions. Horeni emphasized that cooperation between different actors, intensive talks and perseverance are important in solving such challenges.

Katarzyna Szymczak-Pomianowska, director of the “green department” in the Polish municipality of Wrocław, presented the measures the city is using to adapt to climate change. She said climate policy and adaptation to climate change were among Wroclaw’s most pressing challenges. They want to ensure resilience to climate risks such as heat waves, intense rainfall, floods and storms. They are working to reduce the heat island effect and improve the quality of life by planning new parks and green spaces. They are greening existing public areas, in particular she highlighted the project of greening schoolyards. In addition to green, she also emphasized the importance of blue infrastructure and presented the city’s desire to become edible (edible city) and absorbent (sponge city).

Igor Kos from the Regional Development Agency Podravje – Maribor presented the transition of the city of Maribor to a circular economy. The Municipality of Maribor has already outlined its transition to a circular economy in the preparation of the Sustainable Urban Strategy. The WCycle Institute was established in 2017 and has successfully acquired a number of projects to help founding public companies change their operating processes with demonstration projects. With the merger with the Regional Development Agency Podravje – Maribor, the influence of the institute expands to 41 municipalities in the region. In the future, they plan to implement sustainable solutions to improve air quality along Pekre Creek and to renovate the facilities of the former prison, where the agency headquarters are located.

Anett Numa from the e-Estonia Information Center spoke about digitalisation as a tool for territorial cohesion in Estonia. She pointed out that digital connectivity allows people a lot of flexibility, as it is also possible to live in remote countryside or islands and work normally. The whole of Estonia is covered by broadband internet. Online services also mean big savings, only digital signatures are estimated to save 2% of GDP per year. Elections have also been held online for a number of years, with 46% of votes cast online at the last election.

The presentations were followed by a round table where participants discussed the role of different stakeholders in the implementation of TA2030 and how different stakeholders contribute to territorial quality of life. Marek Teplansky from the European Commission, Wiktor Szydarowsky from ESPON, Blanka Bartol from the Ministry of the Environment and Spatial Planning, Anett Numa from the e-Estonia Briefing Centre, Oliver Horeni from the Upper Elbe Transport Association and Igor Kos from the Regional Development Agency Podravje – Maribor participated in the round table.

The round table was followed by lunch and a site visit to good practices of the circular economy and urban development in Maribor. The participants visited the small market on Dominkuševa ulica, the Mobility Center Maribor, GT22 and Vojašniški trg.

What is the link between territorial development and quality of life? How is territorial cohesion included in the new cohesion policy? Join us in the discussion about these and other similar questions and get to know six inspiring cases that contribute to the implementation of the territorial agenda in practice.

Territorial Agenda 2030, adopted by ministers responsible for spatial planning, territorial development and territorial cohesion in December 2020, represents an agreement on common objectives and priorities in the field of territorial cohesion. It highlights the importance of increasing quality of life as an underlying objective of all public policies. Access to and quality of public services, freedom of movement, healthy, resilient, high-quality built environments, quality of air, soil and water, as well as nature, landscape and cultural heritage contribute to the territorial quality of life.

This conference strives to enrich the discussion on territorial quality of life and inspire integration of the territorial agenda into policy processes at different levels. In the first part, we will host distinguished guests to introduce the topic. The main part of the conference consists of six examples of good practice from European countries, regions and local communities who are already following the priorities of the new territorial agenda. The event will close with a discussion on the implementation of the new territorial agenda with a special focus on the quality of life. We are also very excited to take you on a site visit to exemplary cases in Maribor in the afternoon.

The conference is organized by the Ministry of the Environment and Spatial Planning of the Republic of Slovenia, IPoP – Institute for Spatial Policies and the Association of Municipalities and Towns of Slovenia and is part of the Slovenian EU presidency. This is a bilingual event, it will take place in Slovene and English.

If you want to follow the event online, please register here. 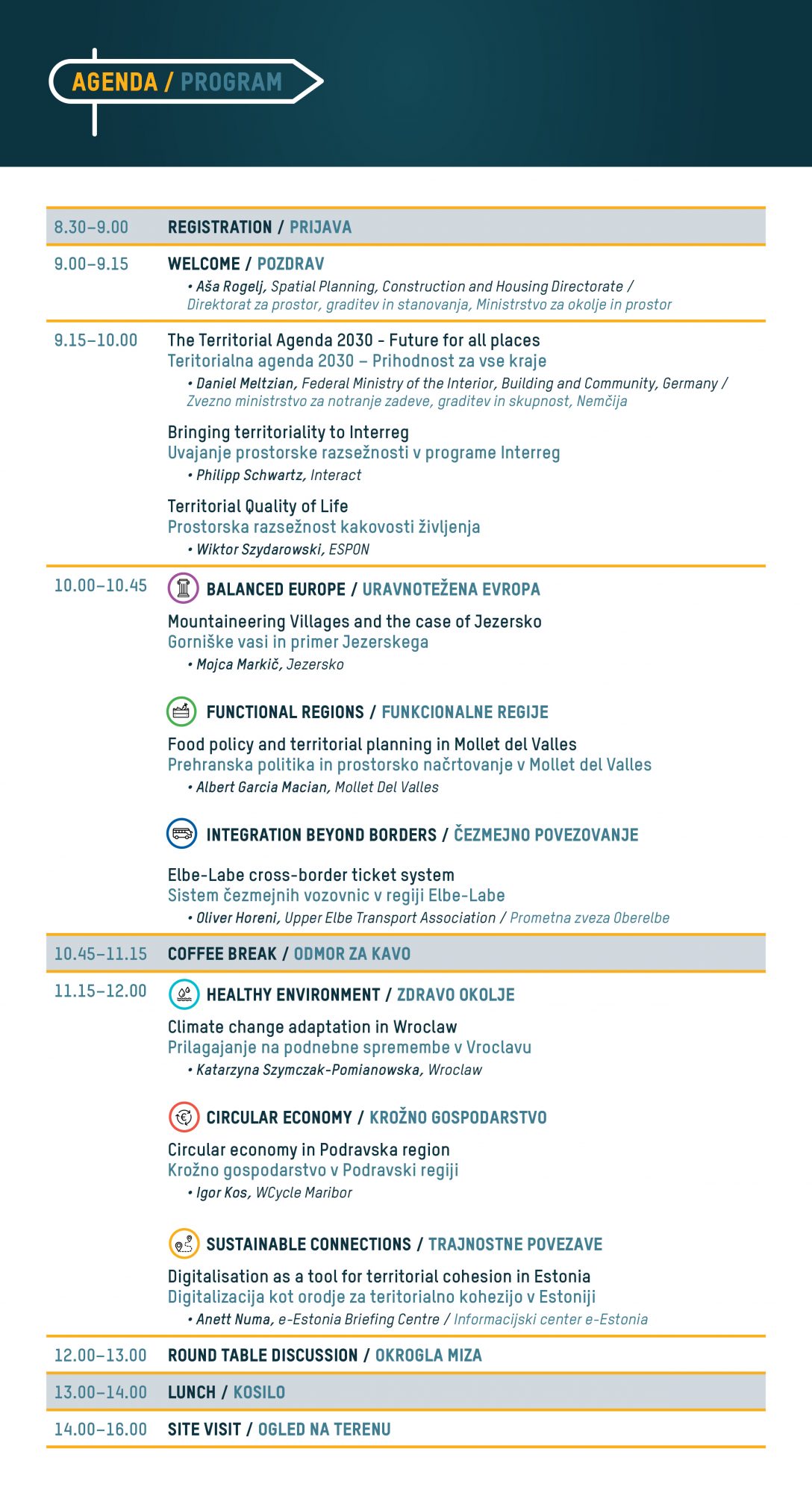